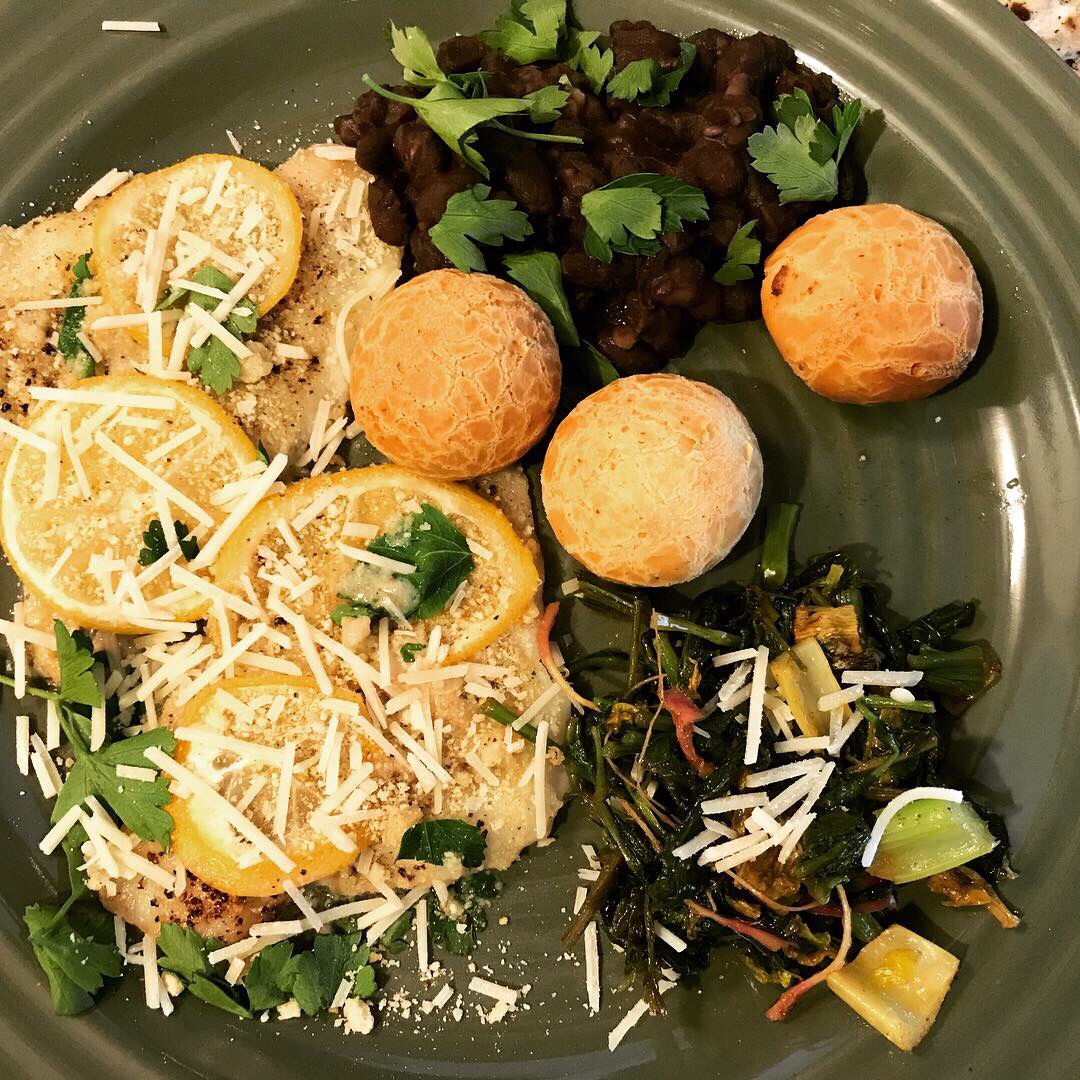 It’s that time of year when Lent begins and fish is in abundance because so many are eschewing meat on Fridays in favor of fish due to religious reasons. We aren’t part of that crowd, but we do enjoy a good flavor-packed, baked fish dinner from time to time. Round it out with some, beans, green veg, and dinner rolls and you’ve got a great weeknight healthy, but hearty springtime dinner!

This recipe for Lemon-Herb Baked Flounder was so good and not too fishy. It can’t be too bad when you coat the whole thing in melted butter, right? The recipe instructs you to put all the fillets in one 3qt (13×9) dish, but I found mine to be a little too wide for this so I just put four in the 3qt, and two in my square 2qt and followed the instructions as normal without issues. The other substitution I made was using Italian bread crumbs instead of blitzing Italian croutons in a processor since I already had the bread crumbs on hand.

Those carrots tops, those radish greens, even the celery leaves. Don’t throw them out! They still have life left in them and they are so good. It was life-changing the day I discovered you could sauté radish greens and they were actually amazing. They turn a little sweet! I mixed my radish greens from the 7-Layer Salad I made not too long ago, along with some celery leaves from the same recipe, and some carrot greens I had stored in the freezer. The celery leaves brought a peppery note and the carrot tops lent their earthiness while the radishes gave off sweetness and parsley some zest and lightness. All you need to do it toss about a cup each into a large frying pan with a pinch of salt and about a tbsp of cooking oil (I recommend grapeseed oil here because it has just as many benefits as olive oil, but handles high heat better and doesn’t release toxins when super-heated) and toss over medium heat until wilted by half or 75% (about 5min). It will serve 2.

I reheated some black beans from my Mardi Gras Shrimp & Grits and sprinkled them with some chopped parsley. They truly needed little more than that at all. For these, I had started from dry. I typically have a few kinds of dry bean in my pantry for planned entrées or spontaneous sides. I know what you’re thinking. How can dried beans be considered a spontaneous side? There is a method for quick-soaking them, but I used my Pioneer Woman Edition Instant Pot. I put about a cup of (rinsed and picked through) black beans into the pot, covered them with about an inch of water, and added a dab of vegetable broth base. I placed the lid on, turned the steam nozzle to sealing, selected “manual” on the keypad and set the timer for 25min. When the cooking time was complete, I moved the steam nozzle to “venting” and allowed to vent for 10min. After the 10min, I carefully opened the lid facing AWAY from me and stirred the beans. They were perfect. I poured off a little of the juice and they will be good for about a week!

To sop up all the yummy juices, I baked off some Brazi Bites! The recipe recommended dinner rolls, but Brazil Bites are delicious and so much easier to portion control if we’re being honest here! If you’ve never had Brazi Bites, you can find them in the freezer section now of most grocery stores. They’re little cheesy breads. Crispy on the outside and cheesy-soft on the inside. I slid them in while the fish was cooking since the temperatures called for were similar.

A complete meal in under 40min! What’s your favorite springtime dinner?